‘Medicare for All’ Is a Fantasy 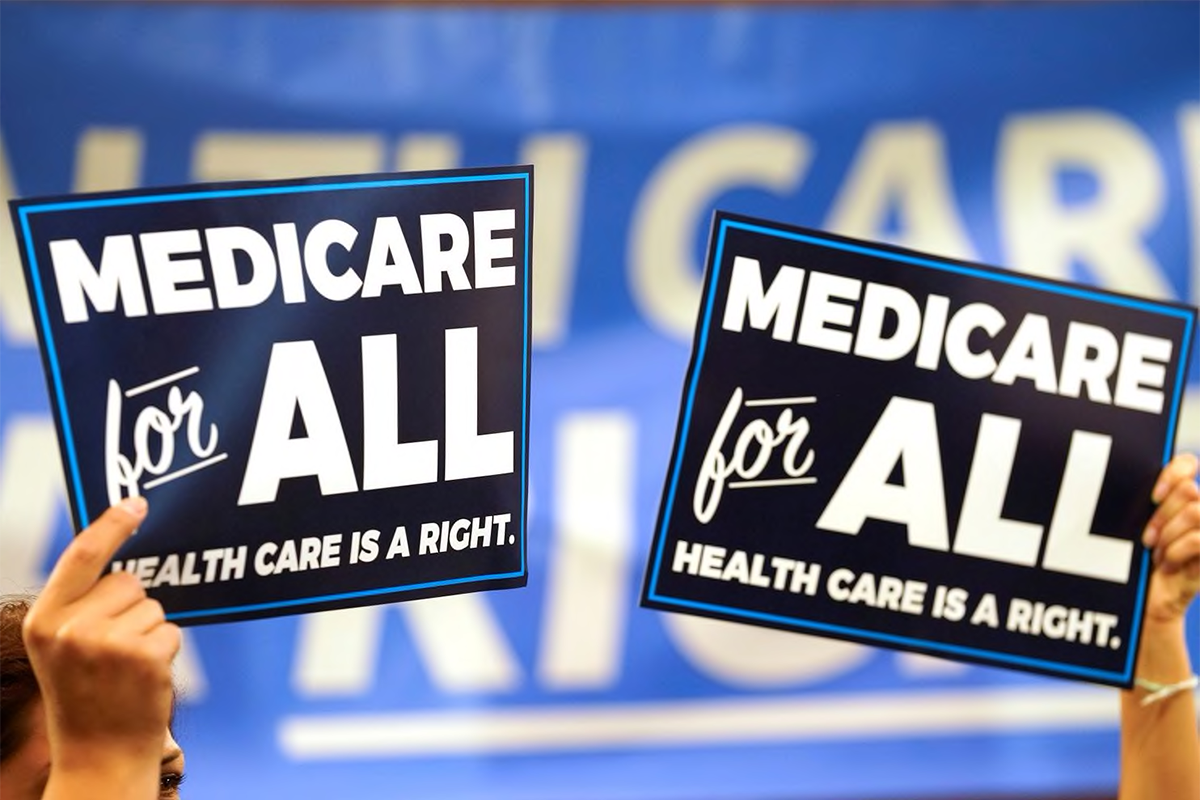 “Medicare for All” is an enormously popular slogan, as evidenced by a slew of recent surveys. Its widespread appeal has emboldened the growing ranks of America’s democratic socialists, the more ambitious of whom see it as the entering wedge of a larger transformation of the country’s economic life. It’s also an indulgent fantasy, based on the illusion that we can simply reset the way the U.S. health-care system operates. And for those who doubt the wisdom of moving the U.S. health system further under state control, and who believe that Medicare is less the solution to its woes than a prime source of them, it’s both a warning and an opportunity. Opponents of Medicare for All must reconcile themselves to devoting more federal dollars to health expenditures in the short run—call it a bribe—to secure a saner and more sustainable health system in the long run.

The failure of congressional Republicans to unite around a coherent alternative to Obamacare is the proximate cause of the single-payer boomlet. The temptation for Republicans will be to focus solely on savaging Medicare for All, leaving the more contentious questions surrounding the pathologies of the U.S. health system to be addressed at a later date. But it would be shrewder to use the threat of Medicare for All to bring the overmighty hospital sector, bane of reformers on the left and the right, to heel.

First, it must be said that the rising popularity of Medicare for All is at least in part a reflection of its conceptual vagueness, as the moniker can refer to a wide array of policies, ranging from the establishment of a public-insurance option to the outright abolition of private health insurance. (Indeed, there have been versions of single-payer I’ve been drawn to myself, such as a system focused solely on catastrophic expenses.) Given this vagueness, it follows that though support for the concept is wide, it is not terribly deep. Merely pointing out that moving to a single-payer system would necessitate substantial tax increases seems to lower support for doing so substantially, which isn’t too surprising in itself. This is one reason at least some Republicans are positively gleeful about the prospect of a prolonged political battle over Medicare for All.

However, it would be a mistake to dismiss single-payer’s appeal so lightly. It is foreordained that Democrats will campaign on Medicare for All in the years to come, as the party’s activists are transfixed by the (illusory) promise of sweeping away the maddening complexity of the health-policy status quo. Moderate Democrats who might have once resisted calls for Medicare for All are either staying mum, out of fear that they’ve fallen out of step, or they are busily devising more palatable versions of the idea that can still bear the name. If plans for Medicare for All eventually run aground, as I expect they will, squeamish Democrats will be a big part of the story. For starters, though, Republicans will have to do the heavy lifting.

How should Republicans meet the challenge of Medicare for All? They’d do well to recognize that fighting the last war will leave them ill-equipped to win the next one. The defeat of Ryancare and, several tortuous months later, that of the fallback Graham-Cassidy bill, should put to rest hopes that Obamacare will soon be dismantled. By zeroing out the individual-mandate penalty, and by relaxing the regulations governing short-term, limited-duration insurance plans, the Donald Trump–era GOP has inadvertently addressed two of Obamacare’s chief political vulnerabilities: the deep and persistent unpopularity of the mandate itself, which is no longer a thing, and the unmet appetite for bare-bones insurance coverage, which is being at least partially accommodated. As much as Obamacare’s champions might rue these initiatives, they’ve left Obamacare’s core features—subsidized insurance exchanges and Medicaid expansion—in stronger political shape. When it comes to the basics of the U.S. health system, the right’s answer to Medicare for All can’t be some rival utopian scheme. Free-market partisans might lament the fact that calls for Medicare for All are wildly popular while paeans to high-deductible health plans and health-savings accounts don’t stir the soul in quite the same way, but it’s a fact all the same. Sober incrementalism must be the order of the day.

Rather than work to undo the exchanges, some conservative policy analysts, such as Chris Pope of the Manhattan Institute, suggest embracing them as a safety net for “low-income individuals and those with major pre-existing conditions.” This is, of course, a far more modest role for the exchanges than what President Barack Obama and his allies had in mind. But that is fitting: If conservative health reform is to gain ground, it will do so by being less hubristic than the left’s version, not equally so. In a similar vein, Pope has suggested that states be allowed to “semi-expand” Medicaid. That is, in deference to states that have been reluctant to accept the Medicaid expansion out of concerns over “crowd-out,” work disincentives, and the potential fiscal burden, semi-expansion would allow them to impose regulations designed to ensure that working-age, able-bodied Medicaid beneficiaries eventually transition to other coverage, whether employer sponsored or subsidized via the exchanges. Such an approach would surely cost the federal government a good deal of money, but it would also expand coverage in some of the country’s poorest states.

One could go further in this direction. The Graham-Cassidy bill went down to defeat in part because numerous Republicans feared, not unreasonably, that by curbing future federal Medicaid spending, it would impose a ruinous burden on state governments going forward. One way to allay these fears would be to ease this burden by, for example, entirely federalizing the cost of caring for the older Americans who are eligible for both Medicare and Medicaid. Though this population represents only 15 percent of Medicaid enrollees, it represents one-third of all Medicaid expenditures and, more to the point, a rapidly rising share of state budgets. Federalizing the dual eligibles would, again, be quite expensive. Yet, as the health-policy scholar Donald Taylor Jr. argues in Balancing the Budget Is a Progressive Priority, it could also yield significant fiscal benefits by improving the coordination of care. And it would make imposing spending discipline on the rest of the Medicaid program an easier sell.

So much for the carrots. What about the sticks? Regardless of ideological proclivities, all health reformers in America must confront the hospital sector. The United States has a vastly larger number of fully kitted-out community general hospitals relative to its population than Europe’s market democracies, and hospital-bed occupancy is far lower. Many of our expensively equipped hospitals are tiny rural outfits, where most beds lie idle. In theory, the reason to maintain these underutilized hospitals is to ensure that decent medical care is within reach of all Americans, including those residing in small rural communities. This is a noble aspiration. Yet it neglects the all-important distinction between emergency care, where having decent facilities within easy reach really is essential, and elective care, when you might prefer better, cheaper medical providers, which means medical providers that have high patient volumes and thus the requisite experience to do their jobs well. Emergency departments really do need to be liberally sprinkled in every corner of the country, and they really do need tighter government oversight to ensure that money isn’t wasted. Elective care is a different matter—it’s the kind of care where the emergence of specialized providers would be a boon, and where getting people to travel to the best, most cost-effective facilities would go a long way toward curbing the monopoly power of locally dominant hospitals.

This is where Medicare comes in. To understand why medical care in the United States is so obscenely expensive, look first to Medicare’s role in propping up underperforming hospitals, which invariably warp the way they practice medicine to capture as much Medicare reimbursement money as they can. The conceit of Medicare for All is that by centralizing health expenditures in a single agency, or at least in a vastly expanded public-insurance program, the government will be in a position to dictate terms to these greedy hospitals. The trouble is that hospitals wield a great deal of power in democratic politics, not least because they employ large numbers of awfully sympathetic people. There are the generously compensated hotshot doctors, yes, but of course many of them are people who might never recoup the enormous investment, in tuition and in foregone opportunities, they’ve made in their training. And that’s not to speak of the legions of nurses, orderlies, custodians, and others who make hospitals hum with life. It is one thing to say you’re going to leverage Medicare for All’s big population of beneficiaries to slash overall health expenditures. It is quite another to be the lawmaker who will be accused, fairly or otherwise, of voting for mass layoffs of blue-collar workers who have devoted their lives to helping others.

Just about every maddening aspect of how Medicare reimburses hospitals began as an earnest attempt to solve some discrete problem. The sum total of these supposed solutions has left us with an awful mess. Medicare for All is, to my mind, a Year Zero fantasy—it’s all about wiping the slate clean and starting over again, with institutions borrowed from some supposedly more enlightened society. But there is no such thing as Year Zero in a democracy, whether capitalist or socialist. The history of how we got to our present shambles will continue to shape, and deform, our health sector.

Instead of indulging the Year Zero fantasy, we ought to focus insurance subsidies on those who need them most and, just as importantly, shift from provider policies that do little more than shield hospitals from much-needed competition to ensuring that all Americans have the emergency and safety-net services they need. This will likely mean a heavier government hand when it comes to delivering emergency care and a lighter touch with respect to elective-care services, where more vigorous competition could redound to the benefit of the highest-performing hospitals while, over time, helping to contain costs. And how would we get politically powerful medical providers to acquiesce? It’s simple: Warn them that if they don’t, they’ll soon wind up with Medicare for All.