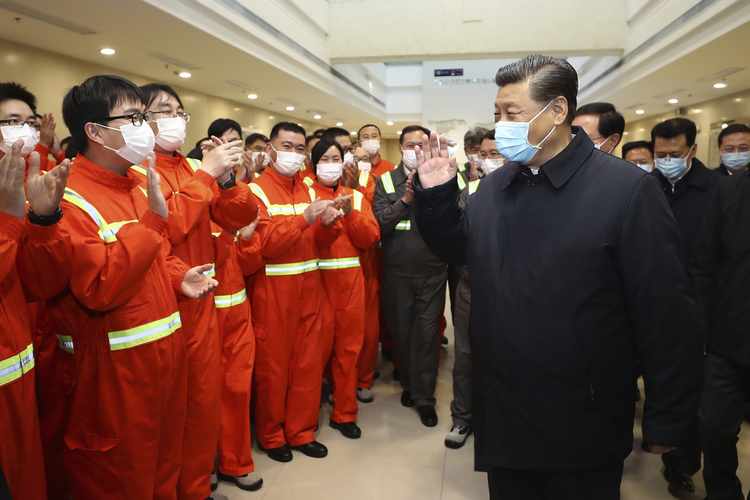 The world is now in the midst of a pandemic that threatens millions. Our first priority in this emergency is suppressing the coronavirus to keep Americans safe. But our next priority must be holding the Chinese Communist Party accountable for unleashing this plague on the world.

Instead of reporting the deadly outbreak in Wuhan when it first appeared, the Chinese Communist Party (CCP) engaged in a cover-up, intimidating brave whistleblowers like the late Dr. Li Wenliang, destroying samples that pointed to the virus’s origin, and shutting down a laboratory that shared the virus’s genetic sequence on the Internet.

By the time the CCP switched from cover-up to containment, it was already too late for the Chinese people and the world. Officials resorted to draconian measures like welding shut apartment doors in a desperate bid to control the virus’s spread.

Instead of fighting the virus to save its citizens, the CCP fought a P.R. battle to save its own skin while enlisting its cronies at the World Health Organization to toe the Party line.

Months later, the CCP is still engaged in a propaganda war about the coronavirus. Last month, a Chinese foreign ministry spokesman speculated that the U.S. Army might have brought the virus to Wuhan.

His comments are part of a larger misinformation campaign to shift the blame for this pandemic from Beijing, where it belongs, to literally anyone else.

We shouldn’t allow the CCP to escape blame for causing this pandemic nor should we put ourselves in a position to be victimized by it again.

That means, first, we should treat this pandemic not just as a war with a deadly pathogen but as an information war with the CCP.

This campaign can start by ignoring cynical CCP flacks and politically correct dupes who claim that referring to the China virus by its point of origin is somehow xenophobic or racist.

The United States must also undertake an investigation into which Communist officials are responsible for covering up the outbreak in Wuhan. This investigation should lead to stiff sanctions against the officials we identify. I introduced a bill last week to make such sanctions possible.

Furthermore, we should restrict Chinese propaganda organs that sow misinformation within the United States, like state-sponsored newspaper China Daily and Confucius Centers on college campuses.

We can even rename the street outside the CCP’s embassy in Washington, D.C. after whistleblowers like Dr. Li, so that the CCP’s functionaries are forced to confront their party’s victims every day when they arrive at work.

As we make sure the history books record the facts about the China virus pandemic, we must also make sure the CCP pays a price for its malpractice, here and now.

If this pandemic has proven anything, it’s that the CCP has abandoned any claim to global leadership. We should move immediately to demote China from positions of prominence in international institutions like the United Nations as well as technical standards-setting bodies that Beijing has coopted in recent years to promote Chinese technology.

We can also bring action against China at the World Trade Organization and revoke its special trading privileges with our country for threatening to cut off access to vital supplies in a time of crisis.

Likewise, Beijing’s influence at the WHO should be rooted out. Cronies like WHO official Bruce Aylward ought to be replaced with impartial public servants who are willing to buck the party line in Beijing.

We should also seek membership in the WHO for Taiwan. It has handled the pandemic better than perhaps any country to date, despite its shameful exclusion from the WHO at China’s insistence.

Perhaps the strongest rebuke we could deliver to the CCP, however, is to end our dependence on China for essential goods like medicine, respirator masks, and other strategically important goods. Export-oriented manufacturing is one source of the CCP’s leverage over foreign countries, allowing it to cut off its trading partners in times of emergency. Pulling our most sensitive supply chains out of China must therefore be a top priority.

That’s why I have a bill, along with Rep. Mike Gallagher, R-Wisc., to end our dependence on Chinese drugs and encourage companies to make essential medicine in America.

Competing with China in the long run will require us to emancipate ourselves from Chinese supply chains for a broader category of high-value goods, while rebuilding our manufacturing capabilities at home so we can quickly surge production of needed supplies.

Times of crisis are painful but they’re also clarifying. At home, this pandemic has allowed our brave doctors and nurses to prove that they’re the best medical professionals in the world. Tragically, it has also exposed alarming vulnerabilities in our government’s response to emergencies.

Abroad, this crisis has proven that Chinese communism is a grave affliction whose pain is felt not only by its subjects but by the whole world.

We must treat the CCP as we would any serious disease: immediately and aggressively.